The episodes of a serialized television series tell small stories that act as the needles, weaving threads of substance and existence all around and throughout the program.

“TV show” has gained broader meaning in the past decade. This style of media is not necessarily syndicated on television and many today are web only, or web focused. I’m using “television series” as a disambiguation of the collection of ongoing short form (10-45 minute) videos. (Do you have a name or definition?) Unlike other media (e.g. novels, video games), TV shows are a direct sensory saturation medium of a non-participatory viewer that can tell stories in an intriguingly unique way. There is fundamentally less time in films, for example, that TV series have to utilize.

This essay is an exploration of how, when done well, episodic storytelling is brilliantly unique.

In thinking about serialization, I developed a sort of spectrum tool to relate threads of a greater story and continuity between episodes (each axis respectively). There are no units, the existence of a show somewhere in the space is defined by its relationship to others. These relationships cross the boundary of genres, acting as another dimension of analysis.

In detail: the two axes criterion are: ‘threaded’ and ‘continuity’. The ‘threaded’ scale marks the magnitude of background threads or background stories (versus the lack thereof). The ‘continuity’ scale is an episode-to-episode metric revealing the extent the of the effect of a current episode on adjacent episodes – that is: does everything reset between episodes. Breaking Bad versus Black Mirror. Cowboy Bebop verses SpongeBob.

This compass is best illustrated with an example. 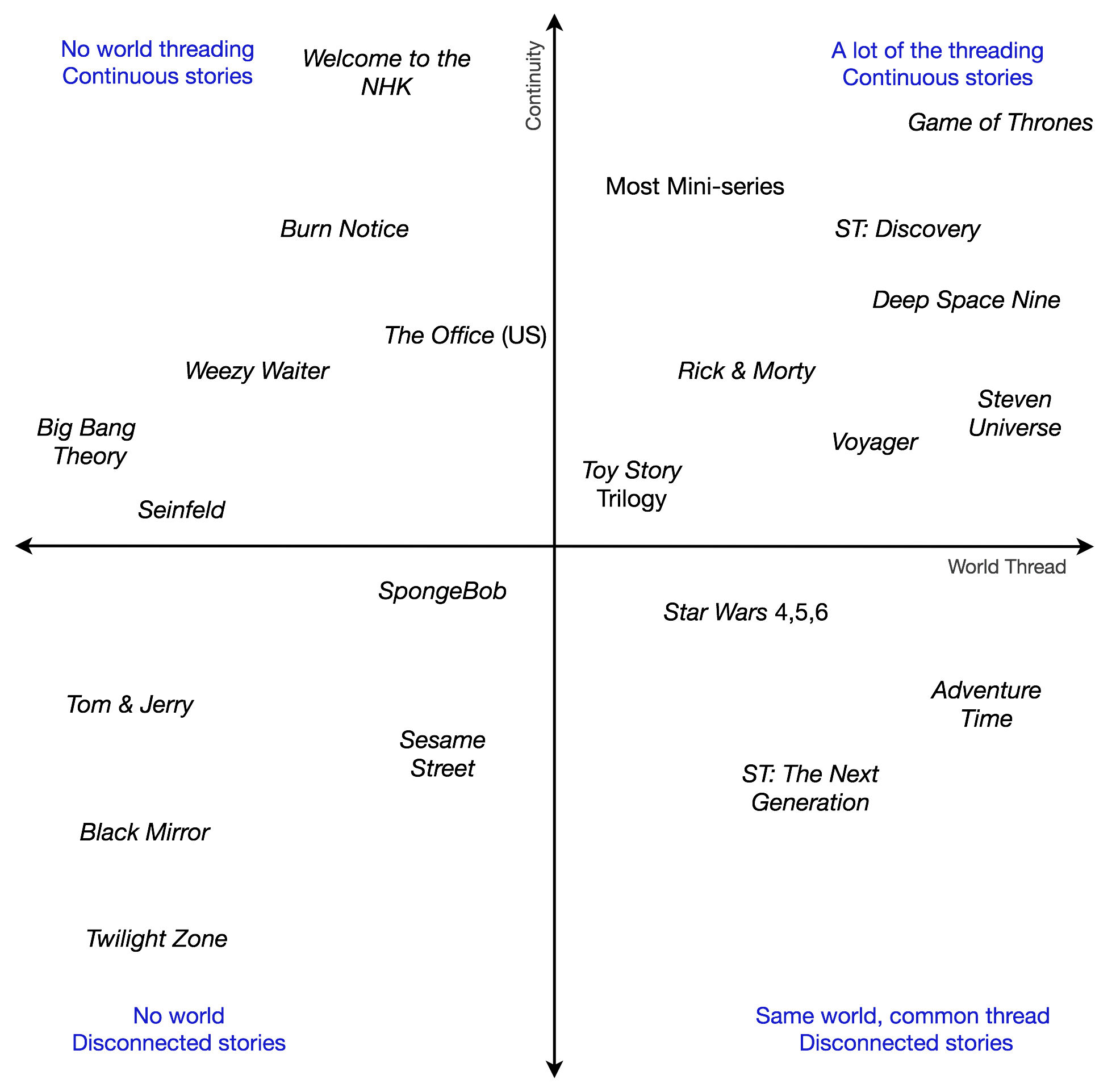 Examples work off media that I’ve personally come across.

Placement of series will vary on the individual, I struggled at times on where to place my own examples. Often as a series develops, there tends to be a general positive trajectory for both metrics. Therefore a show really exists as an arrow trail, rather than a single point.

Despite the left most area where there is a lack of any sort of thread, worlds are still created to some extent – even in Tom & Jerry.

Slow meaning is fulfilling. Small stories created by episodes stretch out time. In a real way, they increase the ‘resolution’ of plot, characters, setting, and the world. They provide moments for the construction of more elaborate connections, or making new connections to a greater extent of characters and settings.

Episodes (when observed as a cluster) significantly contribute to placing the viewer in the world.

When learning about characters, just as people in reality, you’re not suddenly hit with a full detailed backstory. Attributes about people slowly come out, being revealed as you exchange stories, learning various bits and pieces as you spend time with them. Fine detail can be crafted, with the additional ability for many distinct ‘chapters’ of the story to exist – analogous to novels. Breaks between episodes can make jumps in time more naturally.

Still involving structure, episodes also allow for experimentation with the style of direction or the status quo of the narrative; changing how the story is told. For example, swapping to: a musical, fully first person, a guest director, or different visual style, for a single episode. No harm, no foul.

Some kind of resolution episode-to-episode is still needed in these smaller stories such that there is a cohesive separation between episodes. Cliff hangers are a type of resolution. (That is, different from randomly cutting for the sake of breaking up into time chunks.) Cliff hangers are crafted. These episodic –and real and meaningful– resolutions are all waypoints along the larger path(s).

Elements like the classic narrative structure or hero’s journey are simultaneously relevant and not relevant to this discussion. It matters a good deal that there is an narrative arc at the micro-level of an episode. But, frequently complex, story structure can also be viewed on the macro scale across multiple episodes, even up to the scale of seasons.

At these macro scales, the greater story ebbs and flows. For example, there are periods of high intensity climax, periods of character development, and periods of learning and exploration. Multiple spanning stories are told, frequently overlapping, that lead to the future ones. (Similar to conventional season to season jumps).

Plots and stories are fractals (inherently in both directions) – from montage theory to multi-season arcs.

All this is not to say that individual episodes can not be important standalone. Rather, past world building can contribute meaning and feeling to episodes. And, those good standalones can contribute right back into the internal world.

Episodes tell (at least) two stories; different from something like an A/B plot structure. The background story is always present, even if never directly told. This is the ‘passive’ story. The inverse, ‘active story’, is simply: what is happening now; the main focus of the current episode’s story. The passive story is the background threads that are not being actively told, but are rather developed passively via the active stories.

What we don’t experience

“Filler” is not filler! Episodes not directly related to the overarching plot are important. Not only does filler increase the breadth of the world, it provides a break from the main action, allowing various background information to be developed naturally for characters and places before ‘the important’ events take place. Context is not explanation; storyshowing, if you will.

The break from the main action gives an opportunity for comfort, regrouping, reflection, new setup, new context, and etc in service of the greater plot. When done well, filler episodes can be just as interesting in and of themselves. At a fundamental level, this is why we watch. We watch for good episodes.

Episodes without the main or headline character(s) are good when a world is developed. A series is especially notable, if it can tell these stories without detriment. Filler can also be an entertaining look at another view of the world that the audience has not become accustomed too.

Non-action is boring, but it increases realism to know that it at least exists, even if it is not experienced a lot. A creator can demonstrate that things occur when we are not watching with a minimal amount of non-action, usually done in exposition. Seemingly unimportant plots remind the audience that events occur in the world even when we are not watching them happen. There are stakes outside of just the main characters that we have become familiar with. The world is complex! Thinking optimistically, it makes the audiences reflect on themselves, in their world.

Episodes allow the audience to experience the world, enhancing the meaningfulness of the story.

By establishing a location first, later events in that place can focus on the temporal specifics of setting in direct service to the active plot. Context has already been established! Obviously visiting again, just adds meaning to the location the next time the setting is used. For example: comforting rain at a barn where we’ve seen repairs on equipment occur. Or, an introducing peaceful walk in a war torn battlefield from 100 years ago, versus the deadly dark atmosphere as it occurred.

Side note from a meta production point of view: bottle episodes are cheap and easy.

A primary focus of fiction analysis is on characters. What I’m interested in, is: how different people live in the same world, as a means of understanding the character, the plot, and enjoying the experience. Humans do not live in isolation from their environment – physically, societally, and otherwise. Of course, characters are part of the world too. The mythos (plural) of a world inform characters of the existence which they inhabit. It affects what they think, how they think; how they act; and how they change.

As viewers, we frequently relate to characters in some way (especially if designed to by the creators); worlds do the same thing. Much is gained when an audience member can place themselves in the world they are experiencing by making a connection to their own. There is always some connection, they need not be pleasant ones.

[!– Maybe remove this para –] World building may involve groups of people to, as in character amalgamation. For example: “the scientists”, or “the elders”. These are storytelling elements too.

Ultimately, the world, setting, and lore gives a feeling to the viewer and underpins the active story.

Mythos, lore, and the world as an end in themselves

Lore is the history of the (internal) world told through the threads weaved throughout the episodes. It does not need to be explicitly told, rather it may be implicit through the experience of the world. It is better to be shown the origin of the effect of lore, than it is to have it explained. Entire episodes can be built around doing just this – and it works because it’s an episode. Managing audience expectation plays a role, but is not relevant here.

We can connect to a world, but the existence of some fictional language reveals its difference too.

The mythos of a world are interesting in their own right, lagniappe to those who seek it out and spent time with it. I often have the feeling of wanting to visit the places I watch, just for the sake of the places themselves. How would one’s self behave in this world? This is entertainment on a level beyond the engagement of the active plot.

As a creator tool

To briefly touch on creation: with the basis of a world established, events, actions, and new stories can be built off of it. A good example is Adventure Time. The land of Ooo exists as an interestingly peculiar backdrop where the team of writers and storyboard artists can develop stories out of it using the world as a starting point and as a guide.

World building does not necessarily need to be intended by the creator. Indeed, it can be (or may start as) an emergent world.

Where does entertainment come in?

Episodic structure and/or world building are not a magic bullet. Entertainment is relevant! Stories can be both entertaining and meaningful. The latter practically depending on the former. An exceptionally built world cannot make a contribution if the viewer is not engaged with the story. Episodic storytelling births a world from it. The world may help start plots, but ultimately it comes out of the active stories that are told.

Modern viewing habits enabled by web technology make it much easier to consume long serials. Wether on a weekly basis or en masse. These viewer patterns allow for a greater coherence from the audience. Creators can now expect this, and use its advantage.

Think about personal engagement with serial media and how creators connect the stories of each episode. What is the point of TV shows? Creators can use the medium as a storytelling mechanism. Television series enable the enhancement of both general and intellectual engagement from the audience. Characters are part of a complex world of threading foreground and background stories. Combined with modern serial viewer habits, this form of storytelling passively building lore provides opportunity for a fuller entertaining story as a piece of expansive art to engage with.